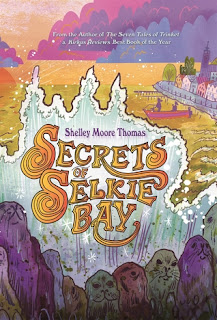 Highly recommend for middle-grade readers. Disclosure: Shelley is a friend I met through blogging, Twitter, and face to face at SCBWI.
Posted by Tricia J. O'Brien at 8:05 AM

This is one of those books that I would have loved to read as a kid. I totally love the cover too. So '70's artwork. I'll order it for Monster (although she's not really a reader) and I can indulge. Thanks, Tricia.

I sometimes wish some of the books I treasure now had been available when I was a kid. I added this to my wish list.

Anne: Yes! I hope you and Monster love it.

Medeia: Me, too. There are so many exceptional books these days. :)

Nothing quite beats the delight of reading at that age.

I love the sound of this story. May have to indulge my inner child and get it. Certainly would have loved it way back when!

Sarah: Being a kid and reading is like the stories open up doors into other worlds and all of it is a wonder, right?

Liza: We need to indulge the inner child. I don't think that ever stops being our core. :)

This sounds amazing. I'm definitely gonna check it out. <3 Yay for selkie stories.