My New York grandmother used to read tea leaves and cards. She whispered to me a secret--that she’d done this until one day she saw a man’s death, then she did it no more. It is one reason I like magical realism—stories set in ordinary life but with fantastical elements, things that are not easily explained, the mysteries of life. However, this isn’t meant to be a discussion of what constitutes magical realism or whether it’s just another name for fantasy. It’s about falling in love with a story no matter what genre is slapped on it. 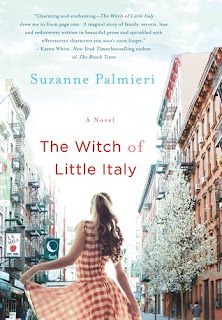 What I can say for certain is Suzanne Palmieri’s The Witch of Little Italy is about authentic, flesh-and-blood relationships, and it’s magical—a wonder of a debut novel.

When I picked up The Witch of Little Italy I felt at home with the characters and their intuition, their ability to know things from afar or before they happen. Suzanne has created a richly-layered family of women who all have The Sight, which gets them into trouble as well as leads them out of difficulties. The few surviving members of the Amore family (a number of them died on one terrible day) live in a Bronx apartment house they’ve owned for decades.

If you like the stories of Alice Hoffman, you should love this. I can’t tell you how many times I’ve listened to the audio version of Hoffman’s The Probable Future, and what I love most about that story are the relationships between grandmother, daughter, granddaughter.

Suzanne has developed women and relationships every bit as complex, difficult, estranged and heartrendingly beautiful. It’s what I hoped I’d find, since I’d been following Suzanne’s blog for a long time and admire her honest and beautiful writing. She’s gutsy, inventive and lyrical.

In The Witch of Little Italy, college student Eleanor Amore, is pregnant by an abusive boyfriend. Her mother is dismissive and cold, so Eleanor takes a chance on a grandmother and grand-aunts she hardly knows since she’s lost her childhood memories. They welcome her to their apartment house as though they expect her. Because they do; they all had “seen” her come home. They see something darker, too.

I won’t give away spoilers. The story slowly reveals the family’s secrets and mysteries. And gives the characters a chance to breathe and grow.

Here are some samples of writing style:
(From Eleanor’s POV):
Eleanor stood very still outside her family’s building on 170th Street. The night was mild for December but the snow fell anyway, glittery dancing dust. It rested in delicate layers, coating Eleanor’s hat and oversized sweater. She kicked the snow and faced her past.

(skipping ahead after Eleanor becomes nervous and stubborn about going inside, even after several invitations from the inhabitants.)
Eleanor turned around and walked to the curb to try and hail a cab.

A crumpled ball of paper flew over her head and landed in the snow at her feet. It began to unfurl. Eleanor picked it up.

“Itsy,” Eleanor said the strange name aloud. It rolled off her tongue and mingled with the snowflakes. Her heart knew the name even if her mind only contained a small recollection. She turned back to see the woman who tossed the paper, but as she turned the door shut tight against her.

(From great-aunt Itsy’s POV):
I thought of the girl, her back pressed against the door in the hallway. That face. Light, like Mama. Soft features, not hard like Carmen. A softer version of her mother in all the good ways. The last time she was back she was about thirteen or so. She wasn’t at all the little spitfire she’d been when we’d first had her. I remember I was so worried that night. Worried she’d remember—just like I am now.

(Itsy, remembering her mother, Margaret Green, who taught them magic and more)
"Life gets heavy," she told us, "like hot summer nights. At first you toss and turn, but slowly you learn that if you keep very, very still your body can capture a random breeze that latches onto you and cools you for a moment. Infinite and blissful, your body soars to greet it and holds onto it, but it leaves. And that's love. That's what love does."

*
Suzanne did a wonderful interview with Joyce Lamb at USA TODAY. She talks about sealing agreements (on the same day!) for two-book deals with two publishing houses. Her second novel, I'll Be Seeing You, is co-written (as Suzanne Hayes) with Loretta Nyhan and will be released in May. It is letters between two women during World War II. You know you want to read this interview and these books. Really, you do.
Posted by Tricia J. O'Brien at 7:00 AM 14 comments: 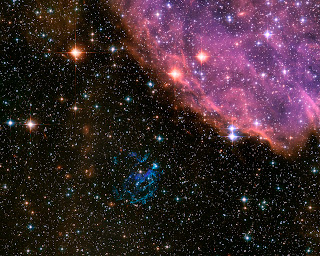 Well, not exactly, here in this awe-inspiring supernova (photo courtesy of NASA), but our little, lovely planet Earth exists in the midst of space, in the dark wonder.

We are the luckiest of organisms to live, breathe, run, sing, imagine and create--all because our planet evolved to allow sentient life.

And then we make bombs and poisons. We level forests and slaughter animals to extinction. We throw trash on the ground, dump chemicals in the precious water, like Earth is something we can buy another one of whenever we use it up.

I've been thinking of going on hiatus, because my posts are sparse these days. But it's Earth Day and this blog is my little soapbox in the universe. I'm, no doubt, preaching to the choir, with the folks who read my blog. Still, I have to shout out: Do what you can to save this planet. It is the only one we've got.

I love Earth. That is all. 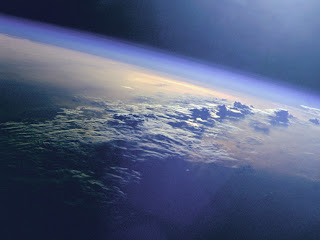