I've been stolen by water horses 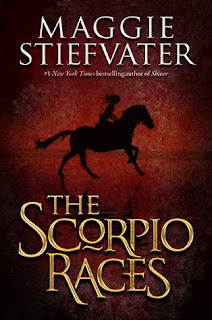 Maggie Stiefvater made me cry. When I came to the ending of THE SCORPIO RACES I had a lump in my throat big as an island of chalk cliffs against black water, painful as the loss of a beloved. And it was the satisfying ache of a story well told, of characters one cares about after the book is closed.
I had thoroughly enjoyed her five earlier books (the Lament fairy stories and the Shiver werewolf tales), but THE SCORPIO RACES is her masterpiece, carved out of myth and painted with blood.
She has explained what it took for her to write this story after many years of trying and not finding it. I think you’re best served to read her words on that. And if you haven’t seen her trailer for which she did both animation and music, do yourself a favor and track it down. Actually, here's a link to both.
Her book proves that she was as ready now to take on this tale as her protagonist Kate “Puck” Connolly and her mare Dove are to face the savage, killer water horses in the deadliest race ever devised.
I kept thinking as I read this how fleshed out and achingly real her characters are, how grounded and alluring the sense of place, how authentic and thrilling the equine detail. And how seductive and terrifying are the water horses.
When my heart wasn’t in my throat it was lost to this wild place.
The story is told first person from Puck’s POV and from that of Sean Kendrick, a young man who loves horses but most of all his water horse, Corr, and what that love costs him.
Here are some writing samples to give you a feel for the atmosphere and thrill of this book:
The wind is sucking the sound away from me, so as I approach the scene, it seems as if the men are voiceless. The struggle is almost artful, until you get up to it. It’s four men, and they’ve snagged a gray water horse around its neck and by the pastern on one of its hind legs, right above the hoof. They tug and they jump back as the horse lunges and retreats, but they are in a bad place and they know it.
And this:
The water shifts, black then gray-blue then black again, the froth of a white ruffled collar, and then, out of the froth, we all see it. A dark horse’s head surges above the water, jaw wide open. And then, before the sea swallows the first, we see a chestnut mare break the surface, along with a brief glimpse of a brown spine curving in the water alongside it. Then they’re all gone beneath the water and I have goose bumps creeping up my arms.
*
Posted by Tricia J. O'Brien at 4:42 PM

Wonderful review, Tricia. While not a huge fan of the Shiver series, I absolutely LOVED Maggie's beautiful, lyric writing. I cannot wait to read The Scorpio Races.

Wow! Amazing creativity--the book, the art, the music. Thanks for telling us about her.

VR: I really think this is her best work yet. I've started re-reading it already and found some gorgeous passages where the writing just sings.

Donna: She really is a lady of many talents. I love that trailer.

With a blog title like this one, I had to come over to see what you were talking about! It sounds good. My niece is a horse nerd but she's only twelve. Do you think this would be an appropriate Christmas gift for a well-read twelve year old???

Thank you for this review. I've been considering getting Scorpio Races, and now you've convinced me! It looks wonderful.

Yvonne: I sent you a more detailed email, but I think a mature 12-year-old could handle this YA. It's scary, because the water horses eat meat and are predatory.

I started re-reading this morning because I was still so captured (one thing bothered me, too, that Puck's age isn't easy to sort, but I forgot that in the glory of this story) Here's another snippet from Sean trying out a particularly wild water horse:
"She is down the beach like an osprey diving for a fish. Breathlessly fast. And always, always conscious of the water angling toward the sea. And again, that sinuous, slippery movement. She seems far less horse than sea creature to me, even now, even in the deep of October, even on dry land. Even with me whispering in her ear."

Mel: Oh, I hope you do get it and love it as I do. Amazing, amazing.

Oh such beautiful writing...thank you for this review.

Liza: You're quite welcome. :)

Oh man! Another book added to the list! How am I EVER going to be able read all the wonderful stories that are out there. Thanks Tricia. This one sounds like a definite must read.

I haven't read any of Maggie's books, and now I think I'm going to get them all! Great review.

Talli: The Scorpio races is sooooo worth it, Talli.