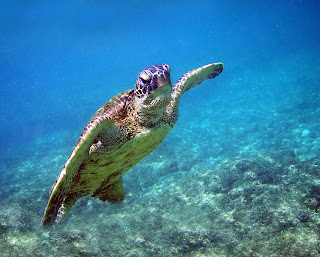 When I learned that Karen Amanda Hooper was kissed by a sea turtle in Hawaii, I thought, "Well, of course. That is the natural order of things."
(picture source)


Karen's blog is one of my favorites--personable, fun, heartfelt. Lately, it's filled with all things mermaid with the upcoming release of her debut, TANGLED TIDES.

On Black Friday, she's doing a blogsplash, which I will participate in, but this is a pre-interview that I hope you'll enjoy. And be sure to come back Friday to join the fun.

Q: This being National Novel Writing Month, I believe you started a mermaid novel during that event a couple of years ago. Did that grow into Tangled Tides? Can you briefly describe how the story evolved?

Karen: I actually started writing my mermaid story in September, but yes, I wrote a good portion of it during NaNo a couple years ago. I think I finished in early January and then edited and revised for a couple months before querying agents. When it received no offers of representation I shelved it for a year. This past summer Michelle Davidson Argyle suggested I send it to Rh 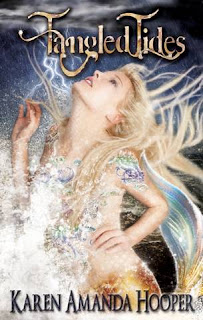 
Q: If magic happened and you turned into a mermaid, what would be the best thing about being a mermaid? The worst?

Karen: Well, my merfolk can control water, so I would have a lot of fun experimenting with that ability. However, my merfolk can't tell a lie. That doesn't sound too bad at first, but imagine not even being able to tell tell those healthy white lies. Like when a friend asks if you can tell that she gained twenty pounds and asks if she looks bad. Silence is your only kind option, and silence speaks volumes. 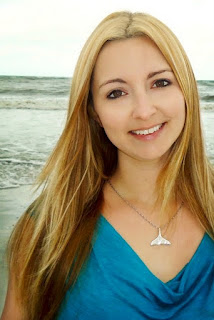 Q: How did you do research for the mythological creatures? Did you invent your own mythology, as well?

Karen: I've had a weird love for Medusa ever since I was a little kid and watched the original Clash of the Titans upmteen times. I already knew her story, but I played off of it and gave it my own twist. All the other mythology in my story revolved around how I imagined things could have been if Medusa and Poseidon were in love and ruling their own world.


Q: Are you a water pixie or land lover in real life? Did you make any excursions into the watery depths?

Karen: I'm a mix of sea, land and air. I love everything from snorkeling to hiking to jumping out of airplanes. My favorite watery depths story is when I was in Hawaii and had the incredible experience of swimming with dolphins and huge sea turtles--in the wild. Not in an aquarium, or touristy encounter where you pay to swim in a pool or something. I was swimming off the Kona coast one morning and spinner dolphins came out of nowhere and decided to jump and play all around us. Then, later, we came across about ten honu (Hawaiian sea turles) and one actually glided up the front of me and his nose touched my chin. I call it the day I was kissed by a honu.


Q: How does it feel having your creation come to life on the pages of a book? To reach that goal?

Karen: It's very surreal. Exciting, but surreal. This time last year I was brokenhearted about having to shelve Tangled Tides, and now it's out in the world as a real book! Heck, six months ago I had nothing but tons of agent rejection letters. Just goes to show that anything can happen in this business. Never give up on a project you love!
Posted by Tricia J. O'Brien at 6:52 AM

What a wonderful interview. Congratulations Karen and thanks Tricia. I'm thinking Tangled Tides is a story I'd be strongly drawn to.

Love this interview! And I love that Karen has such an interesting swimming story. ;)

Alexandra: Isn't it a totally fitting story for Karen? :)

What an awesome story! And it sounds like so much fun too! I'm so jealous about the dolphins and the sea turtles.

What an inspiring interview! I love the way the tides turned for Karen. (Did I REALLY just write that terrible pun?!)

Lisa: I know! Wouldn't it be wonderful to swim with turtles?

Suzanne: Great pun. ;) and, yes, it's really is inspiring.

Suzanne, I loved that pun! :) You should hear all the ocean/fish puns I've been using lately.

Tricia, you're beginning comment put such a big grin on my face. *hugs*
Thanks so much for doing this interview and for your support. My gratitude is deeper than the oceans.

Lovely interview, Tricia and Karen. Oh to swim like that. I have hugged a manatee before, and seen sea turtles, of course. (I'm from the Keys), but to swim with the dolphins and porpoises. Oh wow! Cool!

Great book. I'll buy it. You had me at mermaid novel. Never give up! My new mantra.

Robyn: You hugged a manatee?? I can't imagine how one does that. ;)
And I'm right there with you on the new mantra.

Great interview! Swimming with those turtles would be awesome! :)

Fantastic interview, ladies! Congrats to Karen. And she's right - never give up on a project!

Jemi: Wouldn't it be awesome, especially to have it happen naturally like that?

Talli: Thanks, my dear. I love bloggers of the writerly type sharing their stories. I get so much inspiration and knowledge from the journeys.

Nice interview and so wonderful that Karen's book is coming out--she's a sweetie! Swimming with dolphins sounds too cool. ;-)

And I think it's pretty awesome that she got kissed by a sea turtle! :)

Kathryn: You're so right--she's a sweetie and so deserves this book release. Yay!

Hi Phoenix! Thanks and, oh yeah, how I'd love to have that experience. That would be one of those moments when nothing beats being alive on this planet.

I'm absolutely thrilled for Karen and TANGLED TIDES. What a great success story. I may not be big on "happily every afters" in books, but the real life ones rock!

VR: I love your comment! we can all use a little sugar in this life.

Swimming with dolphins and being kissed by a sea turtle? That's soooooo cool. Congratulations, Karen on your book!

I hope both of you have a wonderful Thanksgiving.

What a fabulous interview! I love reading Shannon's blog and I'm wishing her well with Tangled Tides! :)
My Blog

Yay! I will also be participating in the blogsplash on friday. It's going to be epic!

Also, Tricia, did you take that photo? It's stunning. I'd like to learn some new photography techniques, but man, underwater shots--how can they make them so clear like that?

Lynn and Catherine: Thanks, ladies.

Sarah: See you Friday! it will be so much fun.

Carolina: I didn't take the underwater photo--oh, how I wish I had. I've put the source up there now--Wikimedia Commons.

such a beautiful swimming story, enjoyed it :)

I loved when Karen showed how that amazing cover came to be (on YA confidential).

Great interview and I look forward to reading the book. :D

ShortPoems: Isn't it a great story? Thanks for stopping by.

Stina: I did, too! The cover came together so beautifully.

What a fun interview! I too have swam with wild dolphins and sea turtles and it is a most magical experience. I can see how that would inspire a novel. Congratulations, Karen!

Loved reading how she was kissed by a honu. :)

Sarah!! You've been with the dolphins and turtles. I am so envious of you two. *sigh*

Hawaii has its own magic, doesn't it? I wouldn't be shocked to find mermaids there :)

Thanks for the fun interview!

Sherrie: You betcha! shall we go a'mermaid-hunting?