Sometimes it's brutal out there 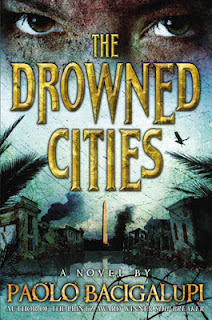 He won a Printz award for the first book, Ship Breaker, set in this world--a future America where war lords force kids to fight for them, torturing, enslaving or killing everyone in their way. I think my favorite character in The Drowned Cities is Tool, a horrific half-man created by scientists as an ultimate soldier. Tool breaks from his controllers and develops his own alliances and moral code.

This book has teeth and will chew on you like a coywolv with a bone.

Here's an early description of Tool: Though it walked like a man, when it bared its teeth, tiger fangs showed, and when it pricked up its ears, a jackal's ears listened, and when it sniffed the air, a bloodhound's nose scented. The soldier had seen it fight in the ring enough times to know that he would rather face a dozen men with machetes than this hurricane of slaughter.

This story is harsh, if you haven't realized that already, here is a snippet of a wounded warboy talking to the main character, a mixed-race girl named Mahlia: Gold-flecked eyes studied her, unblinking. "Got to learn quick if you want to stay alive. Drowned Cities eats stupid for breakfast." He straightened, pushing himself up in bed, wincing. "'Spect you know that, though. I ain't seen a cast-off in more than a year. Last time I saw a girl like you, LT had her head on a stick."

The character development, dialogue, setting and world-building are all well done. Add that to issues raised about the choices people make when faced with war (Do you charge into danger to save a friend? Do you do whatever it takes to survive? Do you allow lines to blur between right and wrong?), and this book has import.
*
*

I also want to acknowledge Jean Craighead George, who died this week. She was 92 and had written more than one hundred books, including the Newbery-winner Julie of the Wolves, which transported its readers (young and older) into the life of a wolf pack on the tundra.

It is such a beautiful and important book that I've been disturbed by people who routinely try to ban it from school libraries because the young girl protagonist flees to the tundra after an arranged marriage leads to a sexual assault. There is nothing graphic about the scene. Sometimes bad things happen. What is important is how people deal with them, and Ms. George gave Julie the tools and smarts to save herself.

Through her many books, she brought the wonder of nature into our lives, and I, for one, am grateful.
The New York Times wrote a wonderful tribute to her.
Posted by Tricia J. O'Brien at 9:52 AM

Great review of The Drowned Cities!

I didn't know Jean Craighead George had died. Thanks for the link to the tribute--she was a great writer.

Thanks, Tricia. I remember Julie of the Wolves. Some people would try to ban Dick and Jane. Ridiculous. Drowned Cities does sound harsh-heads on sticks and all-but intriguing at the same time.

Have a great weekend!

Eagle: Thank you!
Wasn't that article a good tribute? It really showed how her love of nature was there throughout her life.

Yvonne: I couldn't believe anyone could object to her books.
And, yeah, Drowned Cities gives a good kick.

Stephanie: Raw. That's a good word. Sometimes it sure makes the reader feel that way!
I will have a good weekend, and I know, for sure, that you're going to! There had better be celebrations. :D

What a compelling story and cover! It sounds like the kind of book I'd like to get lost in.

This has been on my to read list for a while. I loved Shipbreaker! But I did hear it's quite dark. I'm currently reading EON, which I love! I'll have to get to this one next!

Jean Craighead George wrote some of my all time favourite books! Thanks for the link to tribute her.