In which I gush book love

SERAPHINA, you stole my heart (and a few hours of sleep). 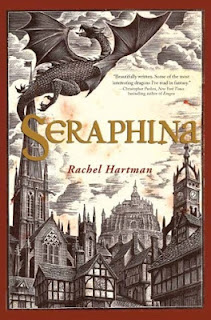 Dragons to die for. Yes, this book has some of the most intriguing dragons ever written. But there is so much more. Rachel Hartman has written a smart, breathtaking, funny, poignant and fresh story with a heroine so full of heart she shines like a candle in the dark. And the love interest? His heart is just as huge.

I read a lot of YA and some MG. Much of it is really good, but SERAPHINA is fabulous--a page-turner that has both substance and style. I hadn't been in a hurry to read this debut, expecting it to be a fun, lightweight fantasy that had something to do with dragons that I'd enjoy but not a story that would carry me off into an intriguingly developed and complex society.

What makes it so wonderful is the deeply-layered world building that includes cultural ramifications, such as religious beliefs and bigotries that feed into the political and personal landscapes. The main character, Seraphina, has something terrible and illegal to hide, but her astounding musical talent puts her in the spotlight and leads her into fascinating and dangerous territory.

Her father warns her to not draw attention to herself, never to play music in public, but when the flute soloist can't play at a state funeral, she has to. Here's her perspective as she sees the grieving royal family:

They needed Heaven's peace. I knew little of Saints, but I knew about sorrow and about music as sorrow's surest balm. That was comfort I could give. I raised the flute to my lips and my eyes toward the vaulted ceiling, and began to play.
I began too quietly, unsure of the melody, but the notes seemed to find me and my confidence grew. The music flew from me like a dove released into the vastness of the nave; the cathedral itself lent it new richness and gave something back, as if this glorious edifice, too, were my instrument.
There are melodies that speak as eloquently as words, that flow logically and inevitably from a single, pure emotion. The Invocation is of this kind, as if its composer had sought to distill the purest essence of mourning, to say, Here is what it is to lose someone.

In Seraphina's world there exists an unlikely truce between dragons and humans, but there are those on both sides who plot against it. Fear, distrust, resentment, hatred ripple through the population. Dragon-fighting knights of old have gone into exile, not willing to forget the wars they'd fought. Dragons, who can take human shape, walk among humans but they never are quite human enough, and are not trusted.

Along with the gripping tale, Hartman's writing soars and sings. Here's another sample of her style near the beginning of this 451-page novel:

He declined to tell me goodbye, as was his usual custom; he turned without a word and took off toward the cathedral. Its facade blazed red with the setting sun; Orma's retreating figure made a dark hatch mark against it. I watched until he disappeared around the end of the north transept, and then I watched the space where he had vanished.
I barely noticed loneliness anymore; it was my normal condition, by necessity if not by nature. After today's stresses, though, it weighed on me more than usual. Orma knew everything about me, but he was a dragon. On a good day, he was friend enough. On a bad day, running into his inadequacy was like tripping up the stairs. It hurt, but it felt like my own fault.
Still, he was all I had.

As soon as I saw the dragons on the cover, I knew this was a Tricia kind of book :)

I knew you'd love this! Wasn't it just amazing? It was just such an intelligent book--gorgeously written as well.

Ah...love when a book like this makes its way into our lives...

Wow, sounds like a fascinating concept and I love the cover. I haven't read dragon stories since my Anne McCaffrey obsession in my early 20s.

Where do you keep finding these books? I will definitely have to put this one on my to-read list?

(You're killing me here. My house will soon be buried in books!)

Wen: If you haven't read this, do! I can only dream of writing like this.

Shelley: I'm so glad you recommended it, and I finally picked it up. I'm floored by such smart, lyrical storytelling. This is a book I'll read again for pleasure and avidly await its sequel.

Laurel: You must, must read this! I know the depth you like to find in stories. This has it all.

Bish: Push the rest aside and read this. I swear you won't regret it.

I'm definitely going to look for it, Tricia. Your recommendations have never put me wrong!

I read this book a few months ago; I was impressed by it, too.

Jemi: Isn't the writing gorgeous??? I love the flow of it.

Eagle: I'm excited to see what comes next.

Beth: Me, too! Thanks for stoppping by.

I don't read many stories involving dragons, but this one looks amazing. I've seen it around and I'm interested in reading it.

I love this book, too. It was one of those stories, that as I read it, I just knew it would stay with me forever. Can't wait for her next book.

Medeia: I have mixed feelings on dragon books and don't seek them out often. But this one works on deeper cultural and psychological levels than some kinds of fantasy. I think you'll really like it.

ScifiWriterMom: Welcome, and thank you for commenting! I, too, am excited to see what she follows this with. :)

The writing is musical too. Sounds lovely!

I've heard such good things about this novel but was turned off by it being about dragons but you make me want to take another look. The cover is gorgeous too. My favorite dragon books as a teen were the Dragon Riders of Pern series by Anne McCaffrey.

Wow. What a stunning cover, and an amazing review! I can't wait to track this one down!

Liza: The prose does sing!

Sarah: I'm amazed by how a book filled with dragons didn't feel like dragonlore but like just a different culture. There was wonderful character development.

Faith: Hi! I think you're gonna love it, really I do.

Hi Tyrean: It is so gorgeous. Hope you get a chance to read it.