The No Kiss Blogfest is back!

The fourth annual No Kiss Blogfest, some of the most fun anyone can have without kissing, is underway, hosted by Frankie Diane Mallis. I wasn't going to join in this year, even though I have every other year. I had no no-kisses and even said so on Twitter.

And then! And then! I got this idea and wrote a flash fiction yesterday that I hope you'll enjoy. I sure had fun writing. I even found a picture that works. I'm beginning to have hope for 2013. 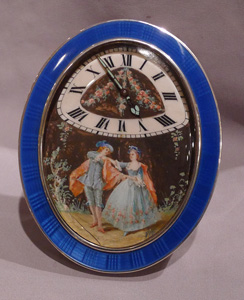 Alys had five minutes. Chronos opened the door between dimensions once at the turn of each year for 300 seconds. Not a second extra would he grant.

She clutched a bone-handle knife and a sheaf of papers. The paper was for Mikel, the knife for anyone who shouldn’t be there.

Stepping through the shimmering light, something like a thin waterfall that had replaced the closet door of her bedroom, she entered an identical room—Mikel’s room in Elsewhere. For the first time, he wasn’t there.

“Mikel,” she said, not too loudly, not sure if something was wrong.

They’d been visiting one another since they were ten. Mikel had stepped through first, scaring the breath out of her one New Year’s Eve as revelers whooped in her neighborhood.

“Where is this?” he’d demanded as if she’d had something to do with him being there.

“Ohio,” she added. When he still looked blank, she turned the questioning on him. “Well, where are you from, just stepping into my room from nowhere.”

But now seven years had passed, and they’d learned to use their five minutes well, exchanging quick words and long letters, full of their hopes and fears, written over the months between meetings. Where could Mikel be? She pulled out of her pocket the beautiful blue enamel timepiece he gave her last year so that she’d never lose track of time and never forget him.

Their precious seconds were vanishing.

The outer door to his room banged open. "Alys." He stood in the doorway, looking taller than last year, shoulders wider, black hair longer. He was breathing hard, cheeks flushed. He shut the door and hurried to her. “I’m sorry. The dimension looters are roaming the streets. I couldn’t let them follow me and find you.”

He grabbed a packet of papers from his desk and thrust them at her. She handed him her papers in exchange and put his in her jacket pocket, where she’d already slipped the knife and timepiece.

“Read them carefully,” he said. “I may have found a way to stay in your dimension without fading. There are things I need you to research for me.”

A closed fist in her chest released, and hope spread like sunshine through her. “Really? What is it?”

“No time, Alys. I…” Instead of finishing his sentence, he threaded his long fingers, still chilled from the night air, into her hair. Gently, he pulled her to him. His eyes were deep purple amethyst, and she hoped if he did find a way to stay with her that he wouldn’t have to cover those unusual eyes with contact lenses. She loved staring in their crystalline depths, but this time she found her gaze drifted to his lips. He was going to kiss her, she was sure of it. How many nights had she dreamed this moment would come?

They leaned into each other, eager, and a little unsure. She placed a hand on his chest and another at his waist. His breath was warm and sweet as apples as he leaned closer, but just then the timepiece rang with a single, haunting chime.

He dropped his hands to her shoulders and backed her into the veil between their dimensions. “Don’t forget me,” he said as he disappeared. As if that were possible. She grasped the timepiece in her pocket and held it tight.
Posted by Tricia J. O'Brien at 3:00 AM

This is s such a great scene - fantastic tension and world-building and the build-up to the non-kiss is great. Awesome flash fiction :D

Oh my! If nothing else, you have to finish this story. I NEED to know if they get together.

Great great writing, Tricia. Thanks so much.

I love it. Love being from "elsewhere". There is a thread of hope in the papers thrust into her pocket, makes me think of all our manuscrpts, wherein lies hope. Good job, as always.

Wonderful as always Tricia!! I remember the first ever No-Kiss of yours I never read, it spurred me to follow your blog. And of course you didn't disappoint this year, this post was absolutely wonderful, I loved it!

Tricia, I would read more of this. Already I am hooked! The premise is amazing.

Here's a resolution for you--Write This Book. (You can think of it as a dare if you want to!) Seriously.

Dang. I really wanted them to kiss.

P.S. (Some of Laini Taylor's book ideas come from flash fiction pieces. It could work for you, too!)

First to all of you: :D:D:D:D:D:D
Thanks for leaving such great comments, makes my day.

Loralie: I'm thrilled you like the world-building, which is tricky to put in when the story is so short.

Anne: I think they should get together, don't you? But other dimensions are tricky. I may have to go on a research journey. ;)

Yvonne: I like the papers they share, too. Reminds me of old-fashioned pen pals, getting to know each other intimately even if they never meet.

Jaybird: Thanks. Gotta love google when you need images.

Shelley: I think you've got a point. Although, I sure have a lot of started stories that I ought to turn into books. Thanks for cheering me on. I mean that sincerely.

I can't count the ways this is fabulous. The time limit really adds an extra element to the tension. Not only did I want a KISS but I wanted them to be fast!

This cannot only be a flash piece. This needs to be a full story right now! ha. What a great concept! I want to read more!! And I loved the no-kiss! :)

I agree you must finish this. Great piece!!

Amalia: I think I need an alternate dimension so I have time to write all the books from all the ideas. ;)

Christine: Oh, thank you, thank you! *sees work ahead*

So glad you joined and wrote your No Kissing story. It was great.

AGH! Please tell me you're finishing this story. This is so not enough!

Lee: I'm glad I did, too. This last year was kind of a lost one for me, so trying to jump-start now. I know you know the power of joining in these blog events. Happy new year, to you!

Amanda: You just made me grin. Although,I did do it as a flash piece, and will have to do a LOT of world-building to go on. But I love the vote of confidence.

I am SO glad you posted and participated again! I'd miss you! And this was fantastic for just pulling it together! Way to bring the tension, Tricia!

Frankie: Me, too--once again I had a great time putting something together and then reading all the wonderful pieces everyone wrote.

Thank you, and I absolutely adored yours!

Aaaawwww...loved this. Wish it wasn't just flash fiction. Something about these characters was immediately sweet and intriguing. Nice job!!

Ooh! Another favorite! This was fantastic!

Ohhh. I want more. But then, so does Alys.

Tamara: Wow, that's an interesting comment on the characters, thank you!

Larissa: Eeeee, you made my day, thank you!

What a GREAT story! I agree with everyone...you must finish this! So glad you wrote!

Saying hello from the blog fest. Lovely lovely scene. A guy with purple eyes- how intriguing is that! I too hope that if these two make it, he wouldn't need to wear contacts either.

Please don't leave this as a flash fiction! This is an awesome concept and your characters have awesome chemistry.

AGH!!! *shakes fist* I hate this blogfest because I always want the characters to kiss. ALWAYS. Even though it's a no-kiss blogfest and I KNOW that going in, but still... :) Great writing. As others have mentioned, I love the chemistry between Alys and Mikel.

Aww! Do they get together?? Great little story!

Sorry so late responding. Got the stupid stomach bug going around. Ugh. But I love seeing these great comments!

Holy crap, that was amazing! I wanted them to kiss so badly! So romantic and swoony! Great job! :) Here's the link to my entry if your interested in reading it: http://thebloggergirlz.blogspot.com/2013/01/no-kiss-blogfest.html

Ella: Wow, thanks so much. I'm coming over to check yours out!

Hi, Tricia! I'm a few days late in checking out the entries for the No-Kiss Blogfest, but late is better than never!

On to the blogfest: this was wonderful. You certainly have a flair for writing. I could almost smell Mikel's breath, "sweet as apples," as you said. Very nice.

Your pacing was just right and you had me hooked from the beginning to the end. That's not an easy thing to do, so kudos to you!

Thanks so much for sharing with us! :)