I came close to drowning in the Atlantic when I was four or five. My sister, who would’ve been fourteen, had taken me to the beach near our house in Oceanside, N.Y.

The funny thing is that I barely remember the fear. The image in the far reaches of my memory is a neighborhood girl a few years older than me deciding that I’d been using my inner tube long enough and she should have a turn. So she yanked it over my head. My initial reaction was outrage at being dumped, but that immediately turned to surprise that without the tube I sank. I hadn’t been taught how to swim. I flailed up and went under again. At some point, my sister who was chatting with friends on the beach noticed and came to rescue me.

There was helplessness in being so little and suddenly unanchored in the vastness of that water, of it rushing over my head. Each memory I have of those early years may be fading on the edges but every one of them carries some visceral punch: the blue-and-white feathers on the floor that were all my dog left of my parakeet; sitting abandoned at the kitchen table peeling the “skin” off canned peas I had to eat; fever dreams of hulking beings whose shadows and crazed chatter bled into waking hours; being swallowed by the skyscraper canyons when we went to the city; euphoria and power in becoming a witch or gypsy at Halloween. 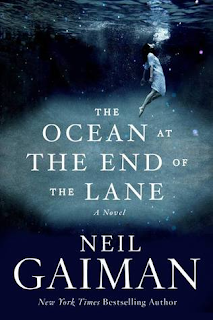 Amazing as it is that we remember events from our early childhood, it’s even more awesome when a writer can settle deep into those moments, pulling up raw truth and turning it into a story new as dawn and old as time itself. Neil Gaiman’s THE OCEAN AT THE END OF THE LANE is one of those books for me, and is the reason I rummaged around my head for those early memories, wondering what I’d find, and then being awed yet again by Gaiman’s ability to wander the paths of childhood and unearth its joys and terrors.

The novel is only 178 pages but packs in a vivid story of mythic proportion. A middle-aged man attending a funeral decides to drive past his childhood home and finds himself continuing to the end of the lane where an old farm reveals his forgotten past.

Truly frightening at times, it weaves the nebulous quality of memory and the ability of a child to see with both confusion and absolute clarity; there’s an honesty to children’s observations despite lack of experience (or maybe even because of it).

All sorts of labels could be attached to this book—fantasy, horror, magical realism, fable. To me, it’s just storytelling at its finest, the kind of tale that is true down to its very bones.

Here are some snippets in Mr. Gaiman's words:

It was dark, and our candles cast huge shadows, so it looked to me, as we walked, as if everything was moving, pushed and shaped by the shadows, the grandfather clock and the stuffed animals and birds…

*
The water was cool on my foot, not cold. I put the other foot into the water and I went down with it, down like a marble statue, and the waves of Lettie Hempstock’s ocean closed over my head.
Posted by Tricia J. O'Brien at 10:24 AM

Labels: Neil Gaiman, The Ocean at the End of the Lane, writing

You really hit on what I loved about this book. It was so real, so visceral, even though it was fantasy--or was it? I was turning the pages so quickly (because my heart was racing!!) that I had to make myself slow down and enjoy the language. But oh! the suspense!

Not a huge Gaiman fan, but you've convinced me to try this.

Shelley: I could feel how Gaiman bled his heart into this one. It went deep for so short a novel. I agree-Wow.

Marcia: I know everyone doesn't connect with Gaiman, but hopefully you'll like this one. I think he's a courageous writer. *fingers crossed you like it*

What a scary thing to be dropped in the ocean like that. Bad neighbor!

I'll have to try this book. I like the title. And the subject matter is interesting.

Anne: Well, she was a kid, too, although she must have been a bit of a bully to do that. Can't remember her beyond that incident.

Have you read Gaiman before? His imagination fascinates me.

Ooh, love the way you recount that vivid memory.
I thought Gaiman's book was fascinating for its ability to make the reader remember his/her own childhood even if it took place in a completely different country or time period to the one in the story. He captured the nuances of a young child's point of view so well.

How horrible to have a near drowning incident! This is the second blog review I've read this week praising this book. I really should read something by Gaiman but I fear he's too scary for me.

I think I'm going to have read this one. Your reviews almost always entice me.

And when did you change the look of your blog?

well, September isn't quite over and I'm going to finally thank Deniz, Sarah and Bish for stopping by and leaving comments!
Does the fact I've been selling a house and checking out the move to another state count for my tardiness? I hope so cuz it's all I've got and I'm still in the midst of the moving, moving, moving.
Love you all!