Marilyn Cram Donahue grew up in a family that cherished its history and storytelling. At gatherings she’d soak up tales of bear fights and Indian encounters, of flooding rivers and parched land, of deadly fevers and homemade remedies, of love found and loved ones lost, of painted ladies and gunslingers, of fields of wildflowers and snakes in the grass.

From this childhood Marilyn discovered that real history isn’t dates and facts. It’s people and how they face life and each other, and that’s how she writes historical fiction by creating characters real as a neighbor. 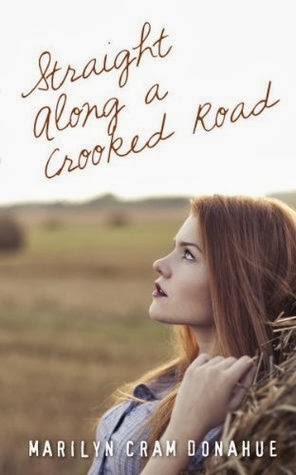 Many of her family’s stories would later inspire her novels, including Straight Along a Crooked Road and The Valley In Between that have been out of print for years and have just been released as e-books (on sale as I post!).  These are what I might call quiet novels in today’s market of action-action-action, but these are characters to care about. I actually woke up dreaming about one of them and the predicament she was in.

I’m going to mini-review them here, so I will also give a disclaimer. Marilyn is a friend. I was in her critique group for several years in California before I moved to Seattle. I miss her warm heart, sharp wit, and each new and wonderful story she imagines.

In the 1850s Marilyn’s ancestors made the arduous trip by wagon across the sprawling lands of North America to be among early settlers of farm country in Southern California. Her family planted the first orange groves in Highland nestled in the foothills of the San Bernardino Mountains. Marilyn stayed close to those roots, graduating from Pomona College and becoming a teacher and writer who has published more than thirty books and taught more than four hundred workshops and seminars.

Straight Along a Crooked Road, which was originally published in 1985 and is now released as an e-book, is the tale of a family leaving their Vermont home and driving a covered wagon past the Great Lakes, across the plains and its restless tribes, and over a scorching trail south through the Mojave Desert.

While there have been many westward-ho stories what makes Marilyn’s special is her ability to bring characters alive, to show their faults and strengths, their pettiness and their nobility. It’s told through the perspective of fourteen-year-old Luanna Hamilton who loves Vermont so much she swears to never leave. Her father has other ideas, which not only tear her away from her best friend but from her dream of continuing her education.

When a wagon train of people leave their homes for the unknown, there’s going to be friction. People argue. They make bad decisions. Some people aren’t just irritating they’re dangerous. One in particular makes Luanna’s skin crawl. Mine, too.

Since Marilyn aims for a middle-grade to young-adult audience, the scenes, even of death, are not graphic. Some readers may want things a little grittier, but these stories shouldn’t be too disturbing for even the youngest and most sensitive readers. They are certainly a great tool for teaching elementary and middle-grade students about migration, history, and changing societal customs and beliefs.  Discussion should be held on the place of women in this society and on attitudes about Indians and people of differing religious belief.

A good story needs humor, and this delivers, particularly through interaction between a lively bunch of characters.

The Valley In Between is a sequel to Straight Along a Crooked Road. Marilyn has used the tales handed down by her great-grandparents, as well as her own love of the land, to infuse the story of Emmie Hamilton, a headstrong thirteen-year-old and Luanna’s younger sister, discovering life in California where law and order is pretty much up for grabs.

I hadn’t realized how far West the Civil War reached until Marilyn’s words brought home the chasm that developed between these pioneers, who had worked shoulder-to-shoulder to get their wagons and families to the golden land of California. But as the election arrived that would make Abraham Lincoln the country’s President, the division caused some secessionists to steal horses from neighbors so they could ride to Texas and join the Confederacy while other settlers requested Union soldiers for protection.

To give you a sense of how Marilyn masterfully weaves character and plot development with a sense of place, here is a snippet from an always outspoken great-aunt commenting on the unexpected arrival of a young man kicked off the wagon train for stealing: “It does seem fitting,” Aunt Clara muttered, after Belvidry had gone home, “that Tawny is blowing in on a Santa Ana. I never did see anything like a north wind for picking up trash and dumping it on the valley.”
Posted by Tricia J. O'Brien at 10:02 AM

Labels: authors, books, Marilyn Cram Donahue, Straight Along a Crooked Road, The Valley In Between

Cool! I just bought them!

Bish: Yay! I think you'll like the family and history quality. It's the kind of books I can see you writing only set in the Caribbean.

These sound awesome - love the title! :)

Hi Jemi! I think that's a mighty fine title, too. I hope you get a chance to read them and share with students. :)

Great title! It must have helpful to have an experienced writer in your crit group.

Thanks for highlighting your writer friend. I bookmarked some of her pages to get back to later. I'd love to read her work.

Hi Sarah: I was in an incredible group. It's amazing how creative energy flows when you have the right mix of people.

Hi Medeia! I'm so pleased you're going to read her work. I'm always astounded how many books you read and review and still have time to write your own. You inspire me. :)