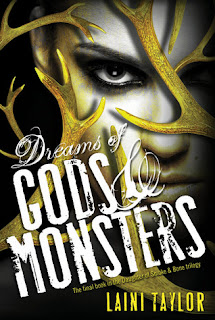 At 613 pages Dreams of Gods & Monsters could easily have been divided into two books, but I’m not complaining because this final book in Laini Taylor’s trilogy is epic and touched me deeply.

Epic as in heroic, majestic, and legendary—masterful world-building and character arcs. And on top of that it retains the joy, whimsy, and gorgeous lyricism of so much of Laini’s writing, including the playfulness of the relationship between teen friends Karou and Zuzana that began the trilogy.

The moments when characters say or think funny asides breaks the darkness and feels authentic despite the otherworldliness of portals in the sky, warring angels, and killed chimaera brought back to life with stolen teeth and bone and the personal pain of the resurrectionist, who is Karou. In another life, she had saved the angel Akiva on a battlefield and fell in love with the enemy, starting a shift in the world.

The story tackles the impossibly huge concepts of good and evil, of bigotry and learned hatreds, of the steely strength of love (of all kinds) in the face of pain and horror. We’re talking torture, rape, genocide.

And all the while, despite treachery, betrayal, and gut-wrenching loss, the characters dig inside themselves and keep moving forward, sometimes utterly alone and sometimes with the help of others.

Upon the structure of those lines are built intricate societies and worlds beyond imagining (well, not beyond Laini’s imagining). And love that is truly epic.

I don’t want to give away the story, but I recommend the series to any reader who loves fantasy with deep layers and gorgeous writing.

(My Goodreads timeline says I started this book a year ago, and although I bought the glorious hardback then I didn’t read it until now. Life was beyond busy, and I didn’t want to start such a long book until I had time to read it through. I’m glad I waited because I was able to lose myself in it.)

Here’s a sample of Laini’s lyrical and unsettling writing: ‘In the Far Isles it was night, and the new bruise that blossomed in the sky would not be visible until dawn. It wasn’t like the others. Indeed it soon engulfed the others—all of them lost in its dark sprawl. From horizon to horizon it spread, deeper than indigo, nearly as black as the night sky itself. It was more than color, this bruise. It was warp, it was suction. It was concavity and distortion. Eidolon of the dancing eyes had said the sky was tired, and ached. She had downplayed the matter.’
Posted by Tricia J. O'Brien at 7:40 AM

Thanks for reminding me that the first book in this trilogy is in my TBR stack.

Hi Sarah: I know fantasy isn't your thing particularly, but Laini is a fabulous storyteller and writer. And I remember that you liked Seraphina!

I have Book 2 ready and waiting on my shelf! Is there anything more beautiful than her writing???

I loved the first book and plan to read the others too. She conveys a wonderful sense of place both in the real world (Prague! Morocco!) and in the fantasy realm. Thanks for the nudge.

I love Laini Taylor's lyrical writing voice, and haven't yet read book three. Thank you for your tasty review. I will definitely find and gobble up Gods & Monsters soon!