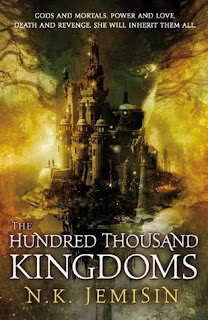 It’s been some time since I fell as deeply into a story as I did with N.K. Jemisin’s The Hundred Thousand Kingdoms. Strangely, I say that even though I started reading it on vacation and had to put it aside for a couple of weeks after I got home. But when I picked it up again I fell right back in. That’s how much I retained my love of the characters and storyline.

This adult fantasy is a fresh take on creation myths and gods. I adore the volatile Nahadoth the Nightlord, and the child-like Sieh the Trickster. The “I” telling the tale is Yeine, a girl who at first seems to be a pawn in a deadly struggle but she turns out to be key to something entirely new. And she is badass through and through.

The story opens when Yeine is commanded to come to the city of Sky where her maternal grandfather, who is uncrowned king of the world, names her one of his heirs, much to her shock and the fury of others. She learns quickly that only one of his three heirs will succeed him, but she doesn’t find out what that entails for quite some time.

She is only half-blood of the powerful Arameri people. They are tall and pale. She is short and dark. The Arameri consider her people in Darr to be barbarians and treat her with disdain.

The truth is Arameri are the most ruthless of all the lands. They are worshippers of the Bright Itempas, the god who created the world with the now-enslaved Nahadoth and now-dead Enefa.
We learn slowly with Yeine as she navigates Sky what the true histories of these gods and mortals are, their secrets and lies, their betrayals and bonds, their despair and hope, their rage and love.

This is the first book (and it was a debut!) in a trilogy. I definitely want to read the rest.

Here, have a few excerpts for voice and style.
*
There were three gods once.
Only three, I mean. Now there are dozens, perhaps hundreds. They breed like rabbits. But once there were only three, most powerful and glorious of all: the god of day, the god of night, and the goddess of twilight and dawn. Or light and darkness and the shades between. Or order, chaos, and balance. None of that is important because one of them died, the other might as well have, and the last is the only one who matters anymore.
*
"I cannot hope that your mother taught you duty," Dekarta said to me over this man's back. "She abandoned hers to dally with her sweet-tongued savage. I allowed this--an indulgence I have often regretted. So I will assuage that regret by bringing you back into the fold, Granddaughter. Whether you live or die is irrelevant. You are Arameri, and like all of us, you will serve."
*
Trickster, trickster, stole the sun for a prank. And apparently because it was pretty. The Three had borne many children before their falling-out. Sieh was immeasurably old, another of the Arameri's deadly weapons, and yet I could not bring myself to dash the shy hope I saw in his eyes.
*
It would do no good to run. So I said, "Good evening, Lord Nahadoth." I was proud that my voice did not quaver.
He inclined his head to me, then just stood there smoldering and looking ominous at the foot of my bed. Realizing that a god's sense of time was probably very different from a mortal's, I prompted, "To what do I owe the honor of this visit?"
Posted by Tricia J. O'Brien at 7:58 AM

I don't read adult fantasy but I can see why you enjoy it.