Orphan Island is a place between here and there

Orphan Island by Laurel Snyder hooked and reeled me in. This middle-grade novel is lyrical, haunting, and unflinchingly honest as it navigates the waters between childhood and puberty. 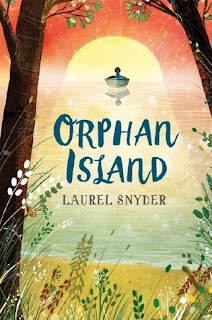 A mysterious island, which is somewhere between here and there, is home to nine very self-sufficient children who live with no adults and an odd assortment of handed-down rules. These kids have distinct personalities and sometimes grate on one another, but they listen and learn, understanding that their survival depends on working together.

Once a year, a self-propelled, little green boat arrives with a new young one and takes away the oldest. The new child, barely out of babyhood, is soon schooled in how to collect eggs, gut a fish, find fruit, and even read.

Among the mysteries of the island is how and why they have a collection of tattered children’s books, which give them a window about life beyond their island. None of them remembers the time before and has no idea where the oldest one is taken when he or she must leave.

The protagonist Jinny is torn apart when her best friend, Deen, is taken by the boat, and she is shaken to know she is now the oldest, the one who will go next. Jinny clings to memories of Deen, to their quiet moments and adventures. She has always loved him and this island with its fantastical sunrises and winds that catch a jumping child and set them down again. She doesn’t want to leave the joy and security of her childhood for the unknown.

What she does about it turns the safe and providing island inside out. In the process, Jinny’s eyes are opened to truths about herself.

This book is wondrous and profound. I recommend for all ages.

Here’s a snippet from the moment after Jinny tries to stop Deen from getting in the boat, after he tells her he’s ready to go, wants to find out what’s out there:

As he sped off, Deen turned to look back at her over his shoulder. He called out something. But what? Jinny could see his mouth open and close. He threw a hand sharply into the air, but whatever he said was lost in the spray and mist as they swallowed him.
Jinny watched the boat disappear. Until all she could see was water and distance. It happened so fast. She found herself standing, reaching out both arms, in the direction the boat had gone. Both hands with outstretched fingers, grasping. As if there was something in the air she might be able to clutch.
Posted by Tricia J. O'Brien at 7:19 AM

Sounds like a really intriguing read. And hey, gotta give props to another Laurel. We are rare flowers in the world. :-)

*waves at Laurel* It's been a long time!
And, yes, it is intriguing. Hope life is blooming for you. :)