Time for a little book love. This one has wings. Well, not the way you think... 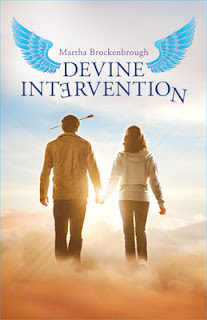 There's one thing I have to say about Martha Brockenbrough's YA novel DEVINE INTERVENTION before anything else:

Seriously, I don't know how she found Jerome's voice but it is golden.  Jerome, a bit of a screw-up with attitude, gets shot in the head with his cousin's arrow and finds himself in soul rehab, where he's assigned as guardian angel to Heidi Devine, a girl with confidence issues. Of course, he immediately "loses" his guardian angel handbook and does as he pleases.

On her website, Ms. Brockenbrough calls herself an author of books for smart kids and juvenile adults, which couldn't be more on mark. This book is clever, hilarious, honest and insightful for almost any age.

Can I, or may I, say again how great the voice is? Because I have to. The story is told in two POVs--Jerome in first person and Heidi in third.

At the end of the first chapter when Jerome reflects on his failed school assignment in 8th grade to take care of an egg all week as if it were a baby, we discover he has some pretty complex layers: "At school the next day, I didn't tell Mrs. Domino it was my pop who ate my egg baby. Even with how things were at home, I have a rule about not ratting because I don't do that to family, no matter what. So I told her I did it, and that it tasted excellent. Because if you're going to get in trouble anyway, you might as well go out in a blaze of glory. That has always been my style. Which explains a lot about the thing that happened later with Heidi."

Life is messy and complicated and this story doesn't pretend it isn't. This is no angel saves the day tale. It is full of misunderstandings and mistakes made by Jerome and Heidi, but they both see the world and other people differently by the end, and, in one way or another, save themselves. And, speaking of the end, this one is a shocker.
Posted by Tricia J. O'Brien at 12:30 AM

I haven't heard of this one yet but it sounds fabulous! The cover is really awesome too. Thanks for the review :)

Good review of a unique sounding book. Thanks

That excerpt is hilarious! Looks like a great read. :)

Thanks for another good review.

Jemi: The cover captures the hilarious nature of this story, which is coming-of-age, despite one being an angel!

Julie: Isn't that a fantastic notion? There's a whole lot of free will allowed but not without consequence.

Yvonne: Than you! And it is most unusual.

Lydia: It is totally hilarious. That's why I can't stop raving about the voice.

Donna: So glad to keep 'em coming since I have a good time reading. :)

Wow, how interesting about the third and first POV's!!! Trying to think if I've read one like that. Sounds great!

Hi Christina: Kathleen Duey's SKIN HUNGER is written in alternating first and third, as well.
I'm going to experiment with it myself in a rewrite I'm doing.

Oh Lord, another book to add to my list! HELP!

Bish: Better than nothing good to read!

Eagle: Glad you liked the snippet. The whole book has such great voice. Oh,, did I say that? :)

Ooo! I haven't heard of this book. I love a great voice. It just sucks me in. I'll have to check it out!

Sounds like a fantastic read! Thanks for the review.

This has got to go on my TBR, only problem; I'll have to live to be 103 to get through it. Thanks.

Suzanne and Talli and faraway: Hello and thank you so much for stopping by and commenting. Hope you do read it and enjoy it as much as I!

I agree, Tricia. I had Jerome's voice echoing in my head for weeks! Great review!