Writing from the heart of loss 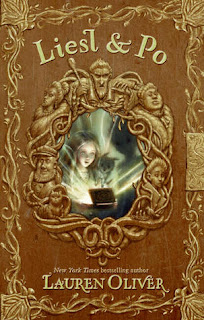 I haven't had an easy time reading lately due to life stuff, but as soon as I picked up Liesl & Po I was sucked in. Perhaps it was because my father is dying and the the first line of this MG novel is "On the third night after the day her father died, Liesl saw the ghost." I felt drawn to the story then, as if it was meant to be read at this time, and, also, I'm a fan of Lauren Oliver's storytelling, having loved the incredible YA books, Before I Fall and Delirium.

Liesl has been locked in the attic of her family home by her stepmother since her father took ill. Po, a shadowy figure who exists in the Other Side, comes to visit her, curious about the pictures she draws. He helps her escape whereupon she meets Will, another orphan escaping from wicked adults. This has the feel of a Gothic fairytale for kids, dealing with the murky concepts of life after death, of the possibility of ghosts and why they stick around, of something else beyond that in-between place. I thought Oliver did a good job of exploring these concepts and their nebulousness.

Here is a sample of when we meet Will, the mistreated apprentice of an alchemist who sends him on errands at all hours of the night: "As he walked down empty street after empty street, past row after row of darkened houses, in silence so thick it was like a syrup that dragged his footsteps away into echoes before he placed a heel on the ground, he had imagined it perfectly: how he would come around the corner and see that tiny square of light so many stories above him, and see her face floating there like a single star."

And Liesl as she remembers life before the attic: "And so she squeezed her eyes tight and climbed down the tower of months she had been in the attic, reaching back into the rooms of her memory that were dusty and so dim she could catch only little, flickering glances of things. There! Her father leading her into the shade of the great willow tree, patterns of green dancing across his cheeks."

And here is a sample of Po's reaction when Liesl tries to grab the ghost's hands. The ghost's gender is nebulous, as well, by the way: "Po could pass through brick walls without feeling a thing; it could disperse into currents of air without pain. But it had felt the girl's hands, somehow, as though she'd been able to reach in and pull at Po's Essence. Essence was not a physical matter, Po knew. No one could touch it. No one could destroy it either; that was the nice thing about Essence."

And that is the nice thing about Liesl & Po, it lets us imagine the possibility of something beyond our troubles, to find comfort in friendship, to accept the wonder that is the essence of those we love.

When I read Oliver's Author's Note, I knew why the book resonated so well with me. She had written this story from the heart of loss, after the death of her best friend. She says writing isn't an escape, it's a way back in, a way to make sense of the world. And so is reading sometimes.
Posted by Tricia J. O'Brien at 7:58 AM

I so know that sensation of reading a book and feeling like you are somehow meant to read it when you did. Glad that this book brought you a little light when you needed it. Sending good wishes your way. <3

It sounds like a heartfelt, wonderful book. Thank you for posting about it!

Lovely, another book for my gift list. Thanks for the review.

Wow - love her comments as well as her writing. It's wording like that that makes me want to dig right in again and get better - such lovely images.

I hope things get easier for you soon. It's lovely to have a book to escape into when life's road gets bumpy.

Thanks for more about this book. It sounds lovely.

Prayers for you and your Dad.

Heartfelt thank yous for these comments to all of you, and that comes from deep in my heart.

Sometimes the right book finds us at the right time. That is one of the Great Mysteries for me, but also one of life's great miracles.

Lovely. I think I'm going to have to read this book.

This has been on my list! Bumped up now. Thanks.