Kids and books and dirt, oh my

This kid's abandon makes me grin as he plays in the water near Marina del Rey, CA. Behind him looms a barge and dredging machine. In this post I'm going to link kids and digging and books. Trust me. 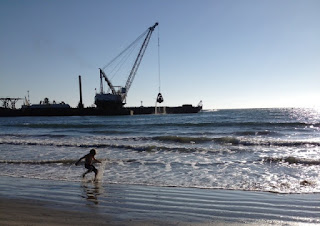 This multi-million-dollar dredging project has been going on for months. The dredger lifts up buckets of sediment to clear the boat channel, and the barge gets hauled miles south to dump the sand at other ports where its needed.

When I first saw that tall rig, I couldn't figure out what it was, so I walked a mile or so to the marina for a closer look. I was even baffled the first time I saw the barge being hauled to sea. Eventually, I put all the puzzle pieces together (and looked online for an explanation!). There are so many projects and jobs in this world that are discoveries to me. 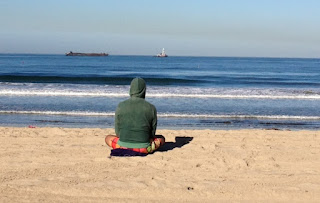 Here's someone watching the barge being tugged out to sea by a smaller craft.

Anyway, I promised kids and books and digging. Yesterday as I walked the shore, a boy yelled, "Dig faster!" to his friend. They were trying to beat the tide as they burrowed into wet sand. Their energy and enthusiasm were contagious, and again, I had to smile. This time I was thinking of a middle-grade adventure I just read, THE SECRET UNDERGROUND by Natalie Bahm, which captures the excitement of kids digging tunnels, the problem of where to put the dirt so they go undetected, the dark secrets they uncover, as well as the value of friendship and loyalty.

I'm not going to give away more than that today, because I have a fun Q&A with Natalie planned for the week of Sept. 28, the release date. Natalie will talk about why she likes to write for middle-graders--that transition period between being a kid and a teenager. If you haven't heard that she's donating all proceeds from the sale of this book to the family of a sick, little boy, she explains why here. *
*
More heads up: There's another middle-grade book I'm going to highlight, THE SEVEN TALES OF TRINKET by Shelley Moore Thomas. I plan to review it this coming week, because Shelley is going to hold a launch party Sept. 20 with all kinds of Trinket-swag. You don't want to miss her party or this delightful book.
UPDATE: Shelley is hosting two parties on the 20th--one on her blog and one at 6 p.m. at the Oceanside Barnes & Noble in Southern California. If you're anywhere in that neighborhood, it looks like it's going to be really fun.

I look forward to your Q&A's and discussions of books. Always very informed. Thanks!

I'm so excited that you got to read The Secret Underground! I love that book so much, and it's so exciting that other people will be reading it to :) Now I'll have other people to talk about it with!

Digging holes to secret places and to hold secret treasures is so much fun for kids - the sense of discovery is awesome! Yay for both Natalie & Shelley - both GREAT people!

Many were the tunnels we dug in the sand, many the times we buried ourselves with just our heads sticking out. (I won't mention the places sand was later found to hiding.)

I love the word "dredge". It is so fraught with a multitude of meanings.

Donna: Kind of you to say and much appreciated, my friend!

Wen: It is interesting how this story is part contemporary and also a bit outside the real world, as if there is a slightly alternative reality regarding the tunnels. :)

Jemi: And discovery is what life is about, the best moments in childhood are when you stumble on something new and intriguing.
I soooo agree about the greatness of Natalie and Shelley, two incredible women.

Bish: Ha, you always crack me up with the stories from the islands, and I just bet you did a lot of digging!

Laraine: Ooooo, me, too. The whole notion of scooping, sucking, dragging the depths is shivery.

Yay for great MG books! Looking forward to the Q&A. That sounds like a fun story.

Heather: I don't usually read much MG, but these are wonderful in completely different ways!

That dredging project looks amazing! The fact that they're literally MOVING the ocean floor blows my mind.

I'm really excited to read THE SEVEN TALES OF TRINKET. It looks like just the sort of book I love. :)

Oh, I already have The Seven Tales.. must remember to order Natalie's book too!

Natalie: I can't imagine the amount of sand being hauled and moved. If I read the stats right it's about one million cubic yards to be moved to other beaches!

Corey: yay! And we all need Three Ninja Pigs, too!

Beach holes are the best! The anticipation of the rush of the waves coming to fill in the empty.

Thanks for taking the time to read my book and to post about it. It really means a lot.