Funny and painful, WINGER is a winner 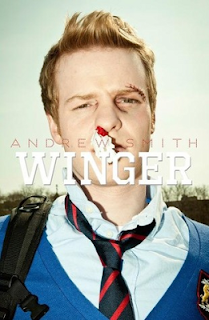 I had to go for a long walk after I finished WINGER by Andrew Smith. I can’t say I was sucker-punched by the ending because I’d guessed what was coming. I was still gutted and distraught, because the characters are so real I felt like something terrible just happened to a friend.

And somewhere on our planet that terrible thing (I won’t give away the spoiler) has happened to someone’s friend, their loved one, and it will never be okay and we must never forget. I believe that books like WINGER matter. They can open eyes and hearts.

But, that said, there’s a ton of witty, laugh-out-loud humor, love and hope in this story of a brilliant fourteen-year-old boy who is the youngest junior at a private boarding school for kids of very rich, too-busy parents. He’s been moved to the dorm for troublemakers, full of boys much bigger than he is. Some of them are dangerous, and some of them are his rugby teammates, who are tough, courageous and tight-knit.

The protagonist Ryan Dean is smart and cocky—this gets him into and out of trouble again and again. I loved him except when I sometimes wanted to yell at him, like his friend Joey does, to get his shit together.

His relationship with his best friend Annie is a perfectly penned story of young love—rocky, uncertain and pure despite Ryan Dean’s missteps. In one scene, he draws a Venn diagram (the book is sprinkled with his often hilarious drawings) to show Annie that he wishes people wouldn't always focus on what's outside the overlapping circles, which in his case is his age.

If you don’t like cussing or being in a teen boy’s head when his hormones are raging, this may not be the book for you. But I recommend it to anyone who likes storytelling that shakes up the world, that makes you both feel and think. The emotions and the consequences in this are very raw and very real. I have a feeling I won’t forget these characters for a long, long time. If ever.

Here are some writing samples. The first one is a tiny prologue. I’m not always a fan of prologues but I really like the set-up of this one:

Joey told me nothing ever goes back exactly the way it was, that things expand and contract—like breathing, but you could never fill your lungs up with the same air twice. He said some of the smartest things I ever heard, and he’s the only one of my friends who really tried to keep me on track too.

And I’ll be honest. I know exactly how hard that was.

It took about five minutes for me to unpack. That’s all. I didn’t have anything. Of course Chas wasn’t there. He’d be out goofing around with his friends, or sneaking off somewhere with Megan Renshaw, who I also thought was unendurably sexy, but not in a mature, Annie kind of way; it was more like an intimidating and scary female-cop-that-arrested-me-in-Boston way. But she was still hot. And, yes, I did get arrested in Boston when I was twelve. It’s what inspired my parents to enroll me in Pine Mountain Academy in the first place.

I know you’re going to ask, so I might as well tell you: It was for breaking into and trying to drive a T train.
*
Posted by Tricia J. O'Brien at 8:53 AM

This sounds like a real winner! Although I'm such a sap about endings that sucker punch you - I'll have to work up to reading it- sounds like it's well worth it!

I want to write characters in this way, making my readers care like they are their best friends or family.

Jemi: I won't deny you may cry, but I believe it's worth it.

Donna: It's so real it hurts.

This reminds me of U.P. a story about a group of teenagers trying to break free of their small mining town in the Upper Peninsula. I kinda loved being inside a teen boy's head. Thanks, Tricia, for putting this one out there.

*waves at Yvonne* Inside that head is a place I've never been so it's eye-opening. :)

Really want to read this--Andrew cracks me up on his blog so much. And the cover!!

You have hooked me with your review and Andrew with his words!

Shelley: Yes, soon, and then prepare to laugh and cry. His storytelling stuns me.

This sounds like a very dark and thought provoking read... I'll have to be in the mood for this one! Adding to my GoodReads list for later :)

*waves at Julie* Dark but lots of hilarity, too. Like real life, I suppose.

Ooooo, this sounds like a good one, albeit, heavy. And... I left you an award on my blog, which I feel you deserve!

Bish: Thank you! I'll drop by for a visit soon.

Wonderful excerpts! You leave me wishing to read more.

Sarah! Hi and thanks for coming by. I think you'll enjoy it.