We Were Liars is so true it hurts 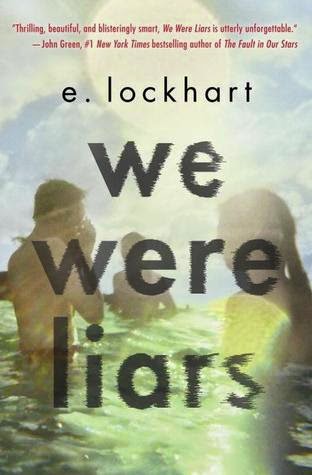 I read We Were Liars two times, start to finish, within days. It's that good, that fascinating, that compelling.

I had read e. lockhart's The Disreputable History of Frankie Landau-Banks (a Printz Award Honor Book and finalist for the National Book Award) and fallen in love with her brilliant storytelling, so when the buzz started for We Were Liars I was excited. No disappointment here. This is another brilliant book--one that left me thinking about the multiple ways people can love and hurt each other, the deceit of behaving as expected, the emptiness of privilege, the danger of moral superiority.

This is one of those special books that is both entertaining and thought-provoking.

We Were Liars takes place mostly on a private island owned by a super-wealthy, manipulative patriarch who summers there with his grasping daughters and fed-up grandchildren. What ought to be idyllic instead seethes with jealousy and desperation, leading to unbearable tragedy. But no more can be said about the plot, because it would be criminal to give away anything that will spoil it for the next reader. This story is a mystery, intricately crafted. In my second reading, I saw clues that could be taken in more than one way. The effect was I didn't see what was coming but accepted its authenticity when all was revealed. And it was so real it hurt to the marrow.

We Were Liars isn't a long book, nor is it heavy with description, but the description it delivers is crisp, fresh, and vivid.

So here are some examples to show lockhart's style, which is simply stunning:

(A beautifully-written, gripping couple of lines about abandonment and loss) The bright red shame of being unloved soaked the grass in front of our house, the bricks of the path, the steps to the porch. My heart spasmed among the peonies like a trout.

(A snippet from the POV character, Cady, about herself) I own a well-used library card and not much else, though it is true I live in a grand house full of expensive, useless objects.

(Cady about her migraines following an accident she can't remember) Welcome to my skull. A truck is rolling over the bones of my neck and head. The vertebrae break, the brains pop and ooze. A thousand flashlights shine in my eyes. The world tilts. I throw up. I black out. This happens all the time. It's nothing but an ordinary day.

(Cady's description of the first time she met Gat) His nose was dramatic, his mouth sweet. Skin deep brown, hair black and waving. Body wired with energy. Gat seemed spring-loaded. Like he was searching for something. He was contemplation and enthusiasm. Ambition and strong coffee. I could have looked at him forever.

You have got me! Amazing language. On my list.

Wow. Those snippets are amazing. Beautiful and strong. Especially the line evoking a trout dying amoungst the peonies. Stunning.

Liza: Glad to hear that! Much of this book is surprising.

Stephanie: It so is!

Yvonne: Aren't they awesome? In some ways, the book is lean but where it counts it really stuns.

Wow - those are powerful words - definitely on my wish list now :)

Oh, I love beautiful writing that lingers, and I think this sounds like it might just be up my alley. Sounds like a good summertime read, too! Thanks for the recommendation.

This is the second glowing review of this book I've read today. I'm ordering it from my local indie bookstore.

Oh, no! I've been away at a retreat and all kinds of busy. I didn't realize I'd not responded to my lovely Jemi, Julie and Sarah.
My bad.
I'm so glad you stopped by and are thinking of reading this book. :)
I'll be curious what you think of it.

Oh my, I hadn't checked Talespinning lately. Great new entries and lots of books to read.

*waves at Donna* So good to have you drop by!

I've heard mixed reviews on this, but I really want to read it. I loved Frankie, too.

Hi Sherrie! I can understand how there would be mixed reviews. It's unusual and kind of shocking, but I think it's bold and challenging. I'll be interested in what you think.