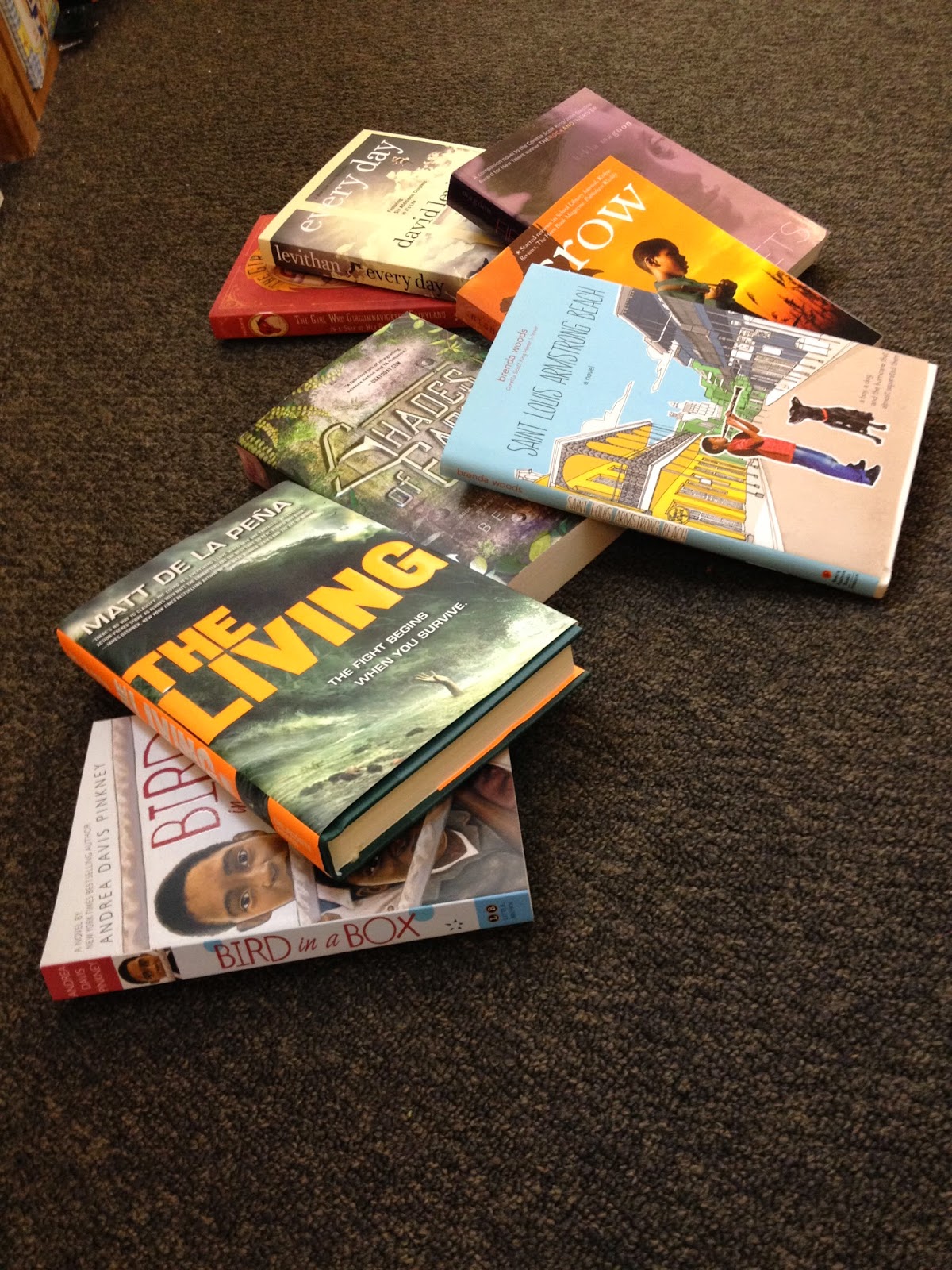 If you've been on Twitter, Tumblr, or other media in the last few days you've probably noticed #WeNeedDiverseBooks and #DiversifyYourShelves, a grassroots movement to increase diversity in books for children and teens.

I decided to go to an independent bookstore and ask a bookseller for suggestions to expand my (already crammed, I might add) shelves. She was great, taking time to not only point out books but talk about each one.

Among my new books is Matt de la Pena's The Living, a disaster-at-sea story with a protagonist from Otay Mesa near the border between Mexico and California. Shy is a towel boy, a water boy, on a cruise ship. His economic background is a world apart from the passengers, but he figures by summer's end he'll make enough to help out his mother, score some gear, and take a girl out.

I love his voice as he considers the last thing: He'd get a reservation at a nice spot, too. Cloth napkins. Some fine girl sitting across from him in the classy-ass booth. Maybe Jessica from the volleyball squad. Or Maria from down the street. All eyelashy smiles as whatever girl glances at him over her menu. "Get whatever you want," he'd tell her. "You ever had surf 'n' turf? For real, I got you." Yeah, he'd play it smooth like that.

Matt de la Pena is a fantastic speaker--funny, heart-breaking, and inspiring. I heard him at the SCBWI LA conference last summer. Using himself as a case study about finding your voice as a writer, he said he was told in second grade he couldn't advance because he couldn't read. He formed an opinion of himself as a bad student, but in high school he began writing poems because he liked the rhythm of language. Eventually, he got into a writing program. He said he decided not to worry about where he fit in but to just work his ass off.

His other books include Ball Don't Lie, Mexican WhiteBoy, We Were Here and I Will Save You.

In my pile o' new books is Bird in a Box by Andrea Davis Pinkney, who also spoke at SCBWI. Set in the 1930's, this novel features three kids looking for hope and finding it in a young Joe Louis, who had a chance to become the next heavyweight champion.

The rest of my new purchases: Crow by Barbara Wright, Fire in the Streets by Kekla Magoon, Saint Louis Armstrong Beach by Brenda Woods, Every Day by David Levithan. I also bought Shades of Earth by Beth Revis, the third book in a futuristic space trilogy, in which humans and society have become homogenized, an interesting concept.

Oh! and for my Kindle, I purchased Best Ramadan Ever by Medeia Sharif.

It will be impossible to remember all the diverse MG/YA books I've ever read but to mention a few I enjoyed: Aristotle and Dante Discover the Secrets of the Universe by Benjamin Alire Saenz; Marie Lu's Legend series; Ash by Malinda Lo; Will Grayson, Will Grayson by John Green and David Levithan. Also I'm a big fan of Paolo Bacigalupi's teen and adult books. And Sherman Alexie!

In the slightly more adult category any book by Susan Straight is a cultural treasure.

Those sound awesome! I loved Medeia's Ramadan book - looking forward to her next one too! Loving the whole diversity movement :)

Medeia's getting lots of attention lately--I have Snip, Snip Revenge on my blog right now. Both books are on my TBR list. Just trying to find time to read everything!

Jemi: I'm really pleased with how many book recs I got from the thread. It was great.

Stephanie: Hi! I know what you mean about time--so many books I want to read, but I'll never write if I don't back off a bit. :)

Thanks for all the interesting new titles. I'm trying to diversify, reading a fantasy right now (something way outside my normal reading habits) and love it! My son gave it to me for Christmas and I'm sorry to say, I just now started reading it and can't put it down! "The Name Of The Wind" by Patrick Rothfuss.

*waves at Yvonne* I'm a fantasy freak, read lots and lots. :) I hope you enjoy it (I'll check it out!)and Happy MOther's Day to you!

Yeah for #WeNeedDiverseBooks! I've been tweeting that too. I just found you on twitter. Wonderful list of books, some I've read and others I want to read. I also include diverse characters in my writing.

Sarah: You found me. :) I've been way behind on blogging, but I get on Twitter more frequently. Can't wait to read your books someday.