All fired up after this weekend

I hope your weekend was as good as mine. SCBWI Writer’s Days rocked. One highlight: a case-study panel discussion with debut author Sara Wilson Etienne, (HARBINGER), agent Michael Bourret of Dystel & Goderich, and editor Stacey Barney of Putnam/Penguin.

For the first time, the event took place over two days. I signed up for a workshop on revision with Stacey Barney, in which she shared her editing process. Priceless. The newspaper reporter in me never dies, so I took notes. I’ll pass along some tips and quotes, because they’re too good to keep to myself.

The panel: Sara started writing HARBINGER a decade ago. “I didn’t know how to write dialogue, so I decided to just skip it,” she said, getting the first of many laughs from the crowd. She put it away for a bit, then added characters and got her page count up to about ninety pages. Then she discovered SCBWI and attended events, leaning more. 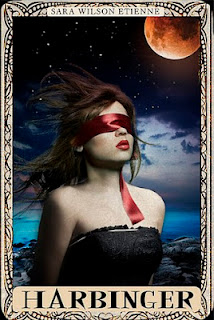 Finally, she was ready to pitch and had a session with Michael Bourret, but she’d misjudged what to bring. “It was an elevator pitch, and we were meeting for half an hour. I was babbling.” But finally she relaxed and started talking about what she loved. “If you start to pitch, and it falls apart, don’t stress out. Agents are people, too.”
Another tip she offered was not to rush into pitching and querying. “It’s about patience and making sure you’re ready.” So, the next time she met Michael at a conference she told him she was revising and not ready to submit although he expressed interest.

Michael told us how he reacted, “Okay, this person is really taking her craft seriously, so when it showed up, I read it overnight, which doesn’t happen very often.” The manuscript went through a couple rounds of revisions between them, which took about a year.
When he considered editors, Stacey Barney came to mind. Even though he knew she might not go for the genre he thought she’d love the writing.
“I trust him. I took it with me on vacation, sat by the pool, reading this book,” Stacey said. “The writing sold me. It was fresh. It felt special and imaginative.” She started making notes as she read. “If I care enough to have a pen in my hand on submission, I’m already editing, so I’ve bought it.” Normally, she reads through a new manuscript three times before fleshing out the editorial letter of places that need work.
“It was overwhelming,” Sara said when the letter arrived. “She’s great at giving you the good stuff first…I had a beer in hand. I recommend this to everyone.”
Later, Sara talked about promotion and how her film and artist friends help her make a kick-ass book trailer and hold an art show of related works in an L.A. gallery. She also created a fake website for the story’s fictional school where she put up the artists’ work.

If you wonder how to impress Stacey Barney think about these things she said in the workshop: “By the end of the first page, I want to feel invested in the character. I want a lot of heart and emotion to come across on the very first page.” “What’s the emotion you want them to walk away with? It’s not about the story it’s about how you’re telling me.”
Here is her checklist for revision: Voice: compelling, prominent, tense? Characterization: personalities clear and compelling? Relationships: believable, important? Pace: slow, fast, how relate to plot points? Dialogue: does it develop character? Scene: 360-degree view? Setting: vibrant? Setting is a character. Writing: spare, lush, lyrical? What is the personality?

So, yeah, that’s a long checklist when you’re talking 300-plus pages of novel. But think how much tighter and dynamic the story would get. 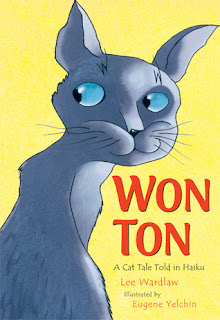 There were many other good speakers, but I have to shout out Lee Wardlaw, who had us all rolling with laughter as she talked about what her cats taught her about being a children’s book author.

Here’s a snippet from her award-winning WON TON, A Cat Tale Told in Haiku, about the adoption of a shelter cat:

No rush. I’ve got plans.
Gnaw this paw. Nip that flea. And
wish: Please, Boy, pick me.

(P.S. this is my first post with the new Blogger make-over, so I hope it doesn't publish wonky *fingers crossed*)
Posted by Tricia J. O'Brien at 4:13 PM

Me-wow - - you just made my day, Tricia! I'm glad you enjoyed my presentation. Could you tell that I had waaaaay too much fun putting it together? :)
Purrs,
Lee Wardlaw

Tricia, I was so excited to see Won Ton in your post! What a treat that you got to hear Lee Wardlaw speak. I am personally in love with her poetry picture book. It's beyond clever.
I'm so glad your weekend was beautiful and inspiring. Thanks for sharing!

Lee: Your good spirits shone through all of that presentation. You had the entire room enchanted and smiling ear-to-ear!

Faith: Have you ever heard her speak? If she comes to an event near you, go! She was hilarious and gave us all a happy high. And you are right, Won Ton is wonderful.

Haikus from a cat? That totally sounds like something my daughter would love--she adores cats and poetry.

Sounds like you had a great weekend! I really enjoyed reading about the panel and how Harbinger came to be novel. The process is always interesting, I think.

I love that advice that the reader needs to be invested in the MC by the end of the first page. I think that's HUGE. I'm glad it was such a fun conference!

Stephanie: Not only from a cat, but a tough little shelter cat. :)
Yes, that list is amazing, that's why I had to share it.

Cynthia: It was so fun to listen to the panel, because they were funnier than I could convey here. There were Wonder Woman and Star Trek connections, too. ;)

Natalie: Hi! *waves*
Stacey Barney really took us through the paces, showing us examples and how to get to that place. You're right, it was HUGE.

Was this the event in MA? I was thinking of going to it! So glad you had a good time and learned so much. I'm in the revision process right now myself, so this was a very helpful post. I love that checklist and will have to use it myself while I'm furiously editing. I love the advice about taking your time... I often feel the need to rush in order to get this story out the door (before someone else comes up with the idea, before X and Y, etc.) but I have to remind myself that I won't be putting my best work out if I hurry.

Those are some amazing tips! This will be a handy post to refer back to when I'm revising.

Sounds awesome! I'd love to attend one of these conferences. I bet you feel completely ready to attack your work afterwards!

Super tips, Tricia. Sounds like an enviable experience. Thanks for sharing it all with us. Harbinger sounds pretty cool, given all the things they're doing to promote it.

Thanks for sharing highlights of this event with us.

Julie: No, this one was in California. There seemed to have been a number of SCBWI events that weekend in the US.
I agree that not rushing is huge. Everybody breathe!

Tere: It's a daunting list but seems really important to use. Here's to ticking off the items!

Jemi: You must attend! You will be so glad you did.

Carolina: I was so impressed with the promotion for Harbinger--so creative and compelling.

Medeia: You're right--the Harbinger cover is a stunner.

THANKS, EVERYBODY for leaving comments. It's always a pleasure to have you stop by. :)

I was in Stacey's revising intensive too. I really enjoyed it. She gave us a great road map for revising and critiquing.

I'm a journalist and former newspaper editor too - nice to connect with another fiction writer with a similar background.

This was AWESOME--tons of useful information and I love that the panel was author, agent, editor all for one book!

What a great conference, it sounds like. Love the cover of that book!

It killed me to miss Writer's Day this year. I attended a breakout session with Michael at SCBWI LA last August. He was wonderful, a super genuine person. BTW Your post looked great. I'm getting new gray hairs with Blogger's latest format switcharoo.

I seriously need to attend a con soon. It's been almost a year since my last one and I'm going through withdraw. Glad you had fun!

Megan: I'm so sorry I didn't meet you there! It was an amazing workshop.

Christina: It was so well organized, and that panel was sheer genius.

DonnaW: Was fantastic all around. :)

Leslie: I'm really sorry I didn't sign up for Michael's pitch intensive this time. I heard from a friend that it was super good.

Karen: You do, you do! We labor so much alone that conferences are a great way to stretch out.

Not wonky in the least. Great post and loved the part where she just skipped writing dialog. Best way to get on with the story, right?

Lee: Hahaha! I loved that part, too. Just get it down!