Finding beauty in the everyday 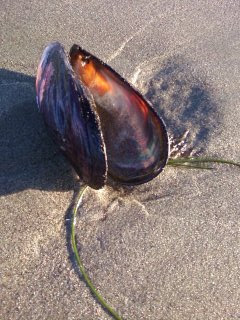 Some pix and musings from my stretch of shore.

Mussels are such unexciting shells that I never paid them much attention until I saw this. The sunlight had found the beauty and lit it like a small lantern resting on the shore.


For this walk, I'd taken my pincers and a couple of grocery bags. Before I'd gone a quarter mile I'd filled the bags with trash--plastic bottles, screw-on caps, a gazillion straws, cigarette butts, t 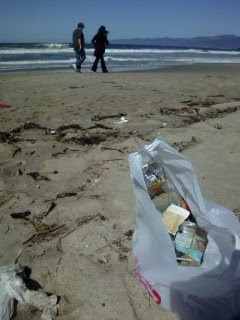 It's a never-ending task to clean a beach. The government trucks use giant rakes on the majority of sand, but there is always trash along the shoreline where it washes up. Sometimes I pick it up.

Sometimes I see the same hippie-guy or a grandmotherly-woman doing the same.

Each piece that doesn't wind up strangling or filling the intestines of a sea mammal or bird makes it worth the effort, even when it keeps on coming. 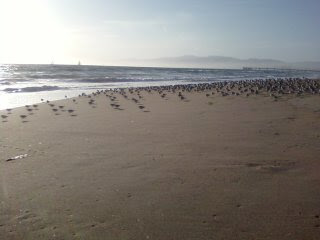 On the far south end of the beach I walk is a fenced-section where old-timey sand dunes still exist for nesting endangered California least terns. In this shot, they've left the fenced area to search for food by the water's edge. The photo is not in great focus but it was as close as I could get (with only my phone camera and no zoom) before they took to the air. You can still see how many there are.
When these shy birds burst into the sky, their black-and-white plumage creates an amazing visual of shifting light.

They're too fast for me to get that shot, but here's a haiku:

I just came back from a visit to the ocean, and you've made me feel like I'm still there.

I haven't been to an ocean side before, but the shores of Lake Superior have similar types of beauty - and dangers from the waste.

I just got back from a trip to the Portland, OR area, and Astoria, OR -- and that first photo really made me miss it. It's interesting how something simple, like a plain shell, can appear radiant if the light's just right. :)

Liza: Aren't we glad to live by the ocean? It offers so much.

Jemi: Yes, unfortunately, the trash washes downstream to all our large bodies of water. We mess up our gorgeous lakes and oceans.

Jo: The play of light, the shifts during the day, are one of the joys of being outdoors, I think. Always some illumination that stops me in my tracks.

So beautiful! I love those mussel shells - they have a color and iridescence almost like an oil slick. Good for you for helping clean up the beach. It really angers me to see people throwing their trash around without a care in the world.

I'm one of the bag ladies on the beach. Hate to see those plastic bags and other garbage littering the sand. Can't imagine what must be dumped into our oceans daily.

Always love your descriptions of water and oceans here. And nice to hear the garbage is being picked up! Nasty. Especially plastic.

The photo of that muscle belongs on a magazine cover. As for the plastic trash... don't get me started. Plus, I'm concerned/worried about the radio-active debris from Japan that's drifting towards the West Coast. Be careful.

Julie: Oh! yes, the color is like an oil slick. so odd where we can find beauty, isn't it?

Lee: Well, if some of us keep doing it, maybe others will follow? One can hope.

Terry: Yeah, plastic is killing so many animals and birds. And it really is astounding how much of it there is.

Bish: Thank you! I usually pick up trash with a long plastic device that has pincers on the end, so that I don't touch it. I used to wear gloves but it's hard to do without them getting wet or in the way.

What a gorgeous beach - it makes me feel better too knowing that people like you are looking after it and the marine mammals/birds.

" ... cloud of fluttering petals" -- I love it. And thanks for the beach clean-up. I keep doing the same on North Hill near our house.

I see what you mean about your post matching mine. Why do people litter? I've never been able to figure it out. One road over from ours somebody just left a bunch of tires in the ditch. I'd like to catch the person and put them on that inmate road crew for a month of Saturdays. Cool Hand Cop could keep an eye on them! Then I'd put them to work on your beach.

Haiku, btw, is lovely. Of course.

Thanks for the urge....off to the beach right now!

That picture of the mussel is beautiful - it's wonderful how sunlight can change an object.

Sarah: aw, thanks, but I do little compared to others. There's a great organization called Heal the Bay that really steps up to the challenge.

Donna: I know North Hill is better place thanks to you. :)

Yvonne: I keep wondering if people who litter live in garbage-filled homes. The earth is our home, after all.

Michael: Hope you had a great beach day!

Ooo! I love that haiku! And I love that you clean up your beach. Although it's really weird because I rarely see garbage on my beach and I'm only about 10 miles north of you. Strange.

I do see the garbage when I walk up Temescal Canyon. The park is clean, but the walk up from PCH is horrible. I too, collect garbage and I was ultra pleased when I passed a man today who was doing the same thing.

Nothing we can't conquer with a little teamwork!

Suzanne: Thank you! And I'm all for the teamwork. :)

Beautiful! The lantern imagery paired with the glinting mussel shell is stunning. And your haikus are lovely.